Dependency management is a hard problem, and Java doesn’t make our lives any easier. Popular build tools like Maven and Gradle do what they can, but their default behavior doesn’t always alert us to potential problems. While both tools can fail when there are dependency conflicts, they’re not enabled by default. Below we will walk through the evolution of a set of modules; how they can go from having no version conflicts, to having runtime failures that should be build time failures. We’ll examine why this happens, and what tools Maven and Gradle have to help guard against it.

All code used in the examples below can be found at the Github repo, kuporific/dependencyMismanagement.

Consider this simple dependency graph, with three modules, A‑1.0.0, B‑1.0.0, and C‑1.0.0. Each module is semantically versioned. Each of these modules contains one class in its public API.

When each module is built and C#main is invoked, it outputs the expected result, regardless of the build tool used:

What’s the result of calling C#main? 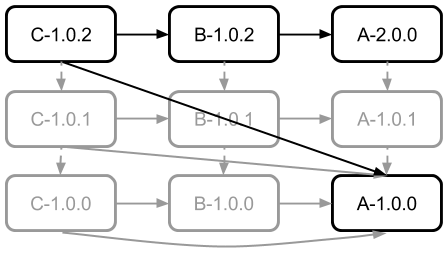 Suppose now that we change the API of class A to this: 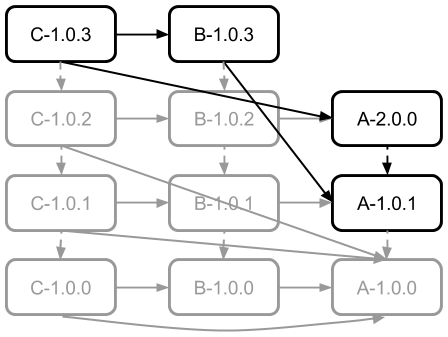 What’s the result of calling C#main?

Different build tools have different strategies for managing the dependency graph of our Java projects; so the answer to , “what’s the result of calling C#main in stages 1, 2, and 3?” depends on which build tool is used.

The dependencies of a Java module (including transient dependencies) can be represented as a graph — specifically, a directed acyclic graph. However, when it comes time to run that module, the graph needs to be flattened. This is because of the way Java identifies and searches for classes.

Java uniquely identifies a class by its fully qualified name, which is its package and class name. Java searches for classes along the classpath. The -classpath option of the javac and java commands (among others) is an ordered “list of directories, JAR archives, and ZIP archives which contain class files”. Furthermore, “the Java interpreter will look for classes in the directories in the order they appear in the class path variable“ (emphasis mine). There is no notion of a class’s “version”; the convention used by the above Stages was adopted many years after Java was introduced.

If there are two classes with the same fully qualified name on the -classpath, the first one wins. This can lead to runtime exceptions, depending on how the dependency graph is flattened. Stages 1, 2, and 3 all have version conflicts. Let’s see how Maven and Gradle behave in each of these stages.

When Stage 1 is built and ran using Maven, the output is

Even though module B explicitly depends on A-1.0.1, they cannot both exist on the -classpath, so Maven must pick one. It resolves the conflict by using the “nearest definition”, that is, “it will use the version of the closest dependency to your project in the tree of dependencies”*. Since A‑1.0.0 is only one step away from C and A‑1.0.1 is two steps away, Maven chooses the former.

How to Fix It

Maven provides the Enforcer Plugin which has a dependency convergence rule. This rule will fail your build when any version in the dependency tree does not match. If we had been using this rule, C‘s build would have failed in Stage 1.

For the Gradle builds, I am using the maven-publish plugin.

When Stage 2 is built and ran using Gradle, the output is

We can see that — while Maven uses the “nearest definition” to resolve the dependency conflict — by default, Gradle uses “the newest version of the dependency”*. This is (usually) fine if your dependencies are backwards compatible, but since Semantic Versioning allows for backwards incompatible changes, this strategy doesn’t always work.

Gradle does a little better than Maven with Stage 2: the build for C fails with the much preferred compile time error:

But it’s no better with Stage 3:

How to Fix It

Similar to the “enforcer plugin”, you can configure Gradle to fail whenever there’s a version conflict*.

The purpose of showing these different Stages was not to compare Maven verses Gradle, but to show that no build tool can make up for Java’s flawed dependency management system. While the default behavior of these tools allows dependency conflicts, the draconian “fail when any version differs in the dependency graph” strategy is far too rigid because all modules within a dependency graph must upgrade to the same version of a particular module at the same time. This does not scale, and is not tenable unless you control all modules and their dependencies within the system.

Where’s the middle ground? Semantic Versioning is just one convention, but since it’s not baked into Java, the version number is a suggestion; it’s difficult to tell if switching from A-1.0.0 to A-1.0.1 will break our module. This is where unit and integration tests can help. Unit and integration tests validate the correctness of a module when one of its dependency’s version changes. Unit tests also verify the integrity of the system as a whole; all unit tests must run when the entire system is built because a module is not guaranteed to have the same dependency version at runtime that it had at compile time.

You might be asking, “if dependency conflicts can happen so easily and are so hard to detect, why doesn’t every project’s build fail or constantly throw runtime exceptions?” Undoubtedly most large code bases are about to throw a runtime exception at any moment because of dependency issues, but version mismatches do not always spell disaster. To see why, consider a module X who depends on a module Y. X only depends on a subset of Y‘s API, call it {X→Y}. If the set of changes to Y‘s API are outside of {X→Y}, Y can update to any version without breaking X.

The above stages are trivial. And their problems are easy to solve when we can control all the moving parts, but suppose this happens in a project with dozens of direct dependencies and hundreds of transitive dependencies? We quickly find our way into the Pit of Dependency Despair.